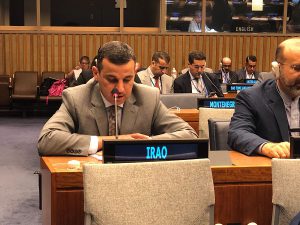 19/06/2018, the Iraqi delegation delivered a speech at the Third Review Conference to overview the progress of implementing the work concern the program of illicit traffic of small arms and light weapons at all aspects to eliminate it.

In order to reach a safe and peaceful world, the Iraqi delegation stressed on the importance of increasing the efforts of international society to lay down an integrated system to fight the illicit trafficking of small arms and light weapons in all kind, banning its export to conflict zones and monitoring its movement across the borders.

The delegation points out that the Iraqi Government takes the illicit traffic of small arms and light weapons in a high concern due to its consideration that it is considered to be the basic source to finance the attacks of the terrorism groups including Da’esh that seeks to obtain these weapons in various means to achieve its goals and criminal intent particularly against the unarmed civilians within Iraq.