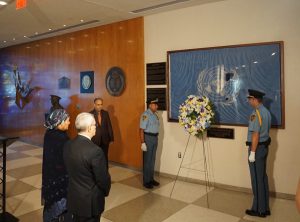 The Deputy Secretary-General of the United Nations, Ms. Amina Mohamed, accompanied by the Permanent Representative, Ambassador Mohamed Bahr El-Uloom, laid a wreath of flowers. Ms. Amina Mohammed addressed the occasion, where she said “those who attack the United Nations want to We cherish the memory of these brave and dedicated humanitarian workers fear, feel weak and retreat, but those who honor them today inspire us to be bold and determined to move forward. Their legacy is enduring and never present among families and colleagues”.