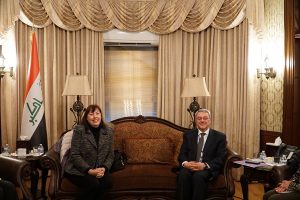 The two parties discussed the collaboration between the Government of Iraq and the Office of the Special Representative to address the new challenges facing the people in the liberated areas, and the urgent need to support and assist children affected by the criminal acts of ISIS. They also discussed the next steps to set up a joint plan that affectively translates the efforts on the ground.

Permanent Representative ambassador AlUloom conveyed the Iraqi Government strong support to the United Nations and praised its credibility, professionalism, and seriousness in helping the children of Iraq.