President of Nineveh Court for Terrorism Cases, participated in the high-level meeting at UN 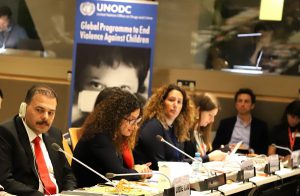 Monday, Sep. 30 2019. Judge Raed al-Musleh, President of Nineveh Court for Terrorism Cases, participated in the high-level meeting organized by the United Nations Office on Drugs and Crime (UNODC) and the United Nations Office on Combating Terrorism (UNOCT) under the auspices of the Kingdom of Saudi Arabia entitled “Protecting Children Affected by Terrorism: A Global Priority”.  The judge made an intervention in which he pointed to the burdens borne by Iraq in the detention of terrorist families, including children, and the Iraqi government’s keenness to deal with this file in accordance with international standards. He also called on the international community to provide full support to Iraq through the provision of financial and logistical support for the establishment of a number of correctional schools, child care homes and rehabilitation facilities. He stressed that the situation could not be postponed and that aid should be urgent as the threat of terrorism remained. He also called on states to shoulder their responsibilities and receive children from terrorist families to reduce the burden on the Iraqi government. 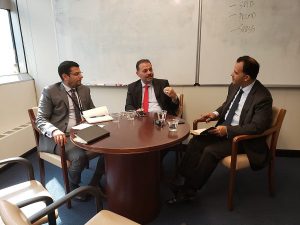 The Mission of the Republic of Iraq to the United Nations, in cooperation with the United Nations Counter-Terrorism Office, organized a program for the Judge which includes interviews with a number of officials of the Organization, as well as a number of bilateral meetings with the European Union, Canada and Saudi Arabia to discuss ways of Cooperate at the bilateral and international levels with the Iraqi government to deal with this issue and support the Iraqi government’s efforts in the areas of combating terrorism, prosecuting terrorists and rehabilitating children affected by terrorism. A joint meeting with all relevant United Nations bodies was held on Wednesday 2nd October, to coordinate efforts to identify the situation of children affected by terrorism in Iraq and how to provide support to victims of terrorism. The visit of His Excellency the Judge had a positive impact in the United Nations to advance the relevant Iraqi efforts.