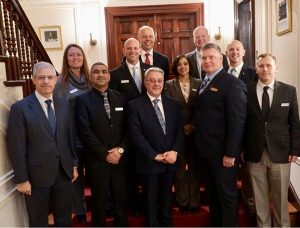 April 20th, 2018. The Iraqi Permanent Representative received a group of students of the U.S. Army War College, in the framework of a program that promotes meetings between students and Diplomatic Missions in New York.

The Iraqi Permanent Representative guided the students through an explanation of the role played by the United Nations and its Specialized Agencies in Iraq through various periods of time. Particularly now, in the post – Da’esh phase, there is a strong co-operation with the Iraqi Government that aims to stabilize   the country and to create a fertile environment for peaceful coexistence.

The Permanent Representative recalled the sacrifices of the U.S. Army along with those of the Iraqis, all of which have paved the way to Freedom and Democracy and helped to build a prosperous future for Iraq, for the region and, ultimately, for the all World.