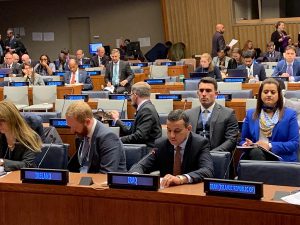 Councelor Hassanein Hadi delivered a speech on 22/10/2019 in the thematic discussion session on nuclear weapons.

He pointed out the position of the Government of Iraq, based on its permanent constitution, that it supports the international efforts and any initiative aimed at reducing the threat of nuclear weapons and other weapons of mass destruction.

“Iraq stressed the importance of establishing nuclear-weapon-free zones, particularly in the Middle East” He said. Any effort to establish a nuclear-weapon-free zone in the Middle East should be paved with key steps, including the Israeli entity’s denuclearization, accession to the Non-Proliferation Treaty (NPT) as a non-nuclear party, and its nuclear facilities under the IAEA’s comprehensive safeguards system.

In this regard, he stressed the importance of the participation of all countries of the Middle East in the conference to be held during the month of November this year, which will be chaired by the Hashemite Kingdom of Jordan on the establishment of a zone free of nuclear weapons and other weapons of mass destruction in the Middle East.