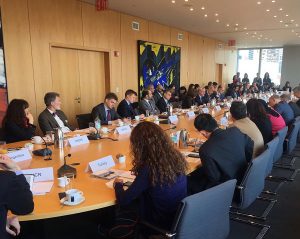 The Iraqi Permanent Representative described to the audience major policy measures adopted by the Government of Iraq to re-establish the values of coexistence and social peace after the defeat of ISIS.

At the end of the lecture, the Iraqi Permanent Representative, on behalf of Iraq, thanked the International Community, all the Iraqi friends and supporters and particularly Germany, whose role in Iraq is highly appreciated in such a crucial moment for the Country.