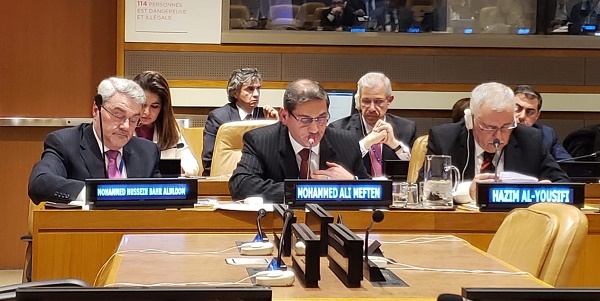 On January 9, 2019, a high-level delegation headed by Mr. Hazem Al-Youssafi, Deputy Minister of Foreign Affairs for Legal Affairs and Multi-Relations, Mr. Mohammed Hussein Bahr Al Uloom, Permanent Representative of the Republic of Iraq to the United Nations, and Mr. Mohamed Ali Muften, Director-General  of the Retrieval Department at the Integrity Commission in the meetings of the of the sanctions committee formed according to  Security Council resolution no. 1518 (2003), which is the first after 13 years.

The achievements of the Government of Iraq were reviewed as; the removal of a large number of Iraqi entities from the sanctions list and its return to its legal status in order to contribute in the recovery of the Iraqi economy and the establishment of a mechanism to assist Iraq in recovering its funds as well as the procedures that Iraqi Government’s will adopt for individuals on the ban list.

In the light of the meeting, bilateral meetings were held with the member states of the Security Council, during which bilateral relations were discussed and the United Nations Member States were urged to recover Iraq’s frozen funds located outside Iraq based on Security Council resolutions 1483 (2003), 1511 (2003) and 1518 (2003).